HELLA increases adjusted earnings before interest and taxes in the fiscal year 2016/2017 by 12.0 per

HELLA increases adjusted earnings before interest and taxes in the fiscal year 2016/2017 by 12.0 percent

• Currency and portfolio-adjusted sales growth of 4.3 percent; reported consolidated sales rise by 3.7 percent to € 6.6 billion
• Growth momentum accelerates in the second half of the fiscal year 2016/2017; mainly thanks to the Automotive segment
• Strong increase in profitability: adjusted earnings before interest and taxes improve to € 534 million; adjusted EBIT margin is 8.1 percent
• Dividend to be increased by 19.5 percent to € 0.92 per share

Lippstadt, 10 August 2017. HELLA KGaA Hueck & Co., one of the world's leading automotive suppliers for lighting and electronics, successfully continued its profitable growth path in the fiscal year 2016/2017 (1 June 2016 to 31 May 2017), and further improved its sales and earnings before interest and taxes. Currency and portfolio-adjusted sales growth was 4.3 percent, which equates to reported growth of 3.7 percent to € 6.6 billion (prior year: € 6.4 billion). HELLA significantly improved its profitability at the same time. Adjusted earnings before interest and taxes (adjusted EBIT) climbed by 12.0 percent compared to the prior year to € 534 million (prior year: € 476 million), while the adjusted EBIT margin rose by 0.6 percentage points to 8.1 percent. Reported earnings before interest and taxes (EBIT) rose by 20.8 percent to € 507 million (prior year: € 420 million). The EBIT margin is therefore 7.7 percent, after 6.6 percent in the prior year.

"We follow a strategy of profitable growth, which we continued to consistently pursue in the past fiscal year", Dr. Rolf Breidenbach, President and CEO of HELLA, commented. "In light of our strategic position as one of the technology leaders along central industry trends such as autonomous driving, energy efficiency and electrification, connectivity and digitalisation, as well as individualisation, we are well-positioned to continue our profitable growth path in the years ahead too."

Automotive segment drives growth in the second half of the fiscal year
The pickup in growth momentum in the Automotive segment in the second half-year contributed significantly to the increase in consolidated sales in the fiscal year 2016/2017. Segment sales improved by 3.8 percent year-on-year to € 5.0 billion (prior year: € 4.8 billion), supported in particular by the strong demand for innovative lighting solutions and electronic products, for example in the areas of radar technology and energy management. Adjusted earnings before interest and taxes (adjusted EBIT) of the segment improved by 13.8 percent over the prior year's figure to € 444 million (prior year: € 390 million). The adjusted EBIT margin, which is based on the segment sales, is therefore 8.8 percent after 8.1 percent the year before.

Selected key financial indicators (in € million or as a percentage of sales): 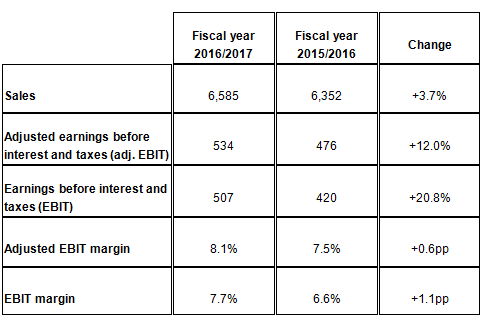 Where sums and percentages have been rounded, differences may arise as a result of commercial rounding.

The annual report for the fiscal year 2016/2017 is now available on the HELLA KGaA Hueck & Co. website.

Please note: This text and corresponding photo material can also be found in our press database at: www.hella.com/press

HELLA KGaA Hueck & Co., Lippstadt: HELLA is a family-owned, listed company operating on the international stage and currently employing approximately 38,000 members of staff at more than 125 locations in about 35 countries around the world. The HELLA Group develops and manufactures lighting technology and electronics products for the automotive industry and also has one of the largest retail organisations for automotive parts, accessories, diagnostics, and services within Europe. With nearly 7,000 people working in research and development, HELLA is one of the most important innovation drivers on the market. In addition, the HELLA Group is one of the top 40 automotive suppliers in the world and one of the 100 largest German industrial companies. It achieved sales of approx. € 6.6 billion in the fiscal year 2016/2017.